Your browser does not support the Unity Web Player. Want to save the game for later? Add it to a collection.

Use a PS4 or an Xbox controller to play this game.

Keyboard controls (if you really have to):

(EASY MODE) Just throw your sticks forward to roll along. Split them to turn left/right. In this mode, rotating is best done when the camera is behind the dog, as if t-boning it, and the bitten portion of the dog is to the right.

(IRON CHEF MODE) If you want to roll, push both analogue sticks up, then down, then up, then down, etc. You'll find a groove. Movement is difficult but far from impossible.

Rotating is best done when the player character is face up (dog side up, bitten portion to the right).

-There's some new stuff in the game. I don't remember all of the cool things I added but the ones I do remember are the splash page and the ability to escape the game (by holding the Esc button).

-The new default control scheme makes it easier to play the game. Holding both sticks up rolls forward, away from the camera. Holding both sticks down rolls backwards, toward the camera. Splitting the sticks not only rotates the player character, it now also rotates the camera. Admittedly, this is a bit hacky and you may still need to use R2/L2 to rotate, but it's meant to make the game a bit easier to play. You don't have to alternate the sticks back and forth anymore... unless you want to!

-Iron Chef Mode: The original control scheme is still available. If you hold L1 and R1 when pressing Start at the opening scene, you'll engage Iron Chef Mode. This is the original way the game was developed and has many practical purposes for the elite cuisinier.

-Cinéma vérité: When you start the game, the camera rotates a full 360 degrees to show the full environment. This is to highlight the fact that there are multiple modes. Player input is disabled during this cinematic experience, so don't even try it.

-Canvas updates: The UI is 23% more beautiful now. Some things fade, blink, and/or pulse. Also, some UI elements broke with the last update due to Xbox Controller support. Those elements are fixed.

-Mac support: I am temporarily taking down the Mac build until I can get my hands on one of those machines and test the game. I'm 96% sure there were many issues with it. Play in browser for now, Mac folks. I'll reupload your build ASAP. <3.

-1 new mode added. Access it by entering the blue shrine in the opening world.

-Forever Feed Mode: Get your Zen on in this infinite Feed The Guy experience. The music is more calming, and you can play until you feel like ending (it all) by rolling off of the map. Perfect for people trying to master the controls without a timer ticking down in their faces. How many times can you feed The Guy?

Wireless Xbox 360 controller - Not tested, but should work.

Xbox One controller - Not tested, but should work.

(if you have those controllers and would like to test if they work, please get in touch!)

-Canvas updates: Some UI elements have been tweaked/added/made to look better.

-Possible bug: The Mac build may not work 100% with controllers. Apparently there are different controller mappings for Mac. Will look into this for the next patch. For now, the web build or Windows build will be your best FTG experience.

-Quattro StaGuyoni Mode: What's better than 1 Guy? 4 Guys. Feed them all but be careful! If you mess up a feed, that Guy's shrine will rise!

-Forever Feed: Locked at the moment, but I'm guessing you can guess what this mode is. Zen.

-Keyboard controls: Get your fingers on the home row and FEED THE GUY! E and D will control the left side of the dawg while I and K will control the right side. S and L check The Guy's cravez and your dawg's topz, respectively. A and ; will rotate the camera if that's something you're into. Note: The game is designed to be experienced with a DualShock 4. If you have to use a keyboard, so be it, but you can't really get into the DawgFlow without some DualShock 4 sticks.

-Total Time Elapsed: In the results screen, it'll show you how long your run was. This will become super fun with the upcoming Forever Feed mode. Get hype. Or calm. Get calm and meditative.

-Perfect Feeds boost speed for a short while.

-Under and Over Feeds are now accounted for.

-Wrong Feeds are now accounted for.

PEOPLE HAVE PLAYED THIS AND THEY HAVE SAID...

"Is this Stephen's Sausage Roll?"

"You have made the Dark Souls of food-rolling simulators."

"Are apples a common hot dog topping? Am I missing something?"

Should work out of the box. Feel free to email me with questions/complaints. Compliments are cool, too. 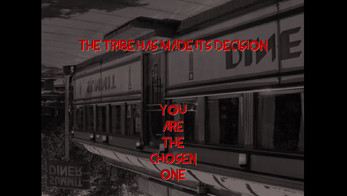 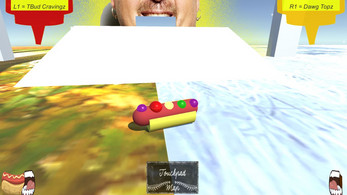 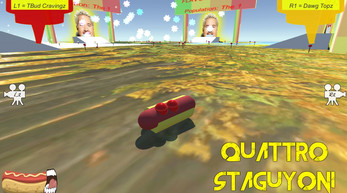 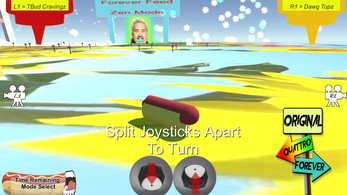